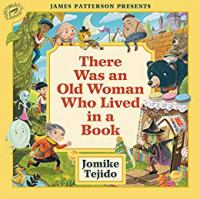 General Note
Original Wonderbook ISBN replaced by publisher.
General Note
Release date supplied by publisher.
General Note
Print book published: New York : Jimmy Patterson Books/Little, Brown and Company, 2019.
General Note
Audiobook originally released by Hachette Audio.
General Note
Issued as a Wonderbook, a pre-loaded audiobook player permanently attached to a hardcover book.
General Note
Powered by a rechargeable battery ; USB charger required for recharging.
General Note
Audiobook player has 2 modes. Read-Along mode narrates the story. Learning mode asks questions related to the story.
Participants/Performers
Read by Caitlin Kelly.
Description
The little old woman who lives in a book has lost her children! But instead of sitting around and waiting for them to show up, in a refreshingly empowering, feminist take on the classic tale, she departs on a mission to find her kids herself-- even if it means popping into every other fairy tale and nursery rhyme in town! She'll enlist the help of Humpty Dumpty, Jack and his beanstalk, Princess Beauty, the Three Bears, and more familiar characters in her quest to rescue her kids.
Target Audience
Pre-K to 1.

Tejido, Jomike and Caitlin Kelly. 2020. There Was an Old Woman Who Lived in a Book. Solon, Ohio: Findaway World, LLC.

Tejido, Jomike and Caitlin Kelly. There Was an Old Woman Who Lived in a Book Solon, Ohio: Findaway World, LLC, 2020.

Tejido, Jomike,, and Caitlin Kelly. There Was an Old Woman Who Lived in a Book Findaway World, LLC, 2020.