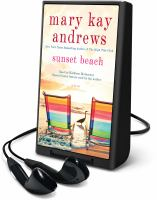 General Note
Title from container.
General Note
"HD."
General Note
"Light."
General Note
Previously released by Macmillan Audio, ℗2019.
General Note
Release date supplied by publisher.
General Note
Issued on Playaway, a dedicated audio media player.
General Note
One set of earphones and one AAA battery required for listening.
Participants/Performers
Read by Kathleen McInerney ; special bonus feature read by the author.
Description
"Drue Campbell's life is adrift. She's out of a job and down on her luck, and life doesn't seem to be getting any better when her estranged father, Brice Campbell, a flamboyant personal injury attorney, shows up at her mother's funeral after a twenty-year absence. Worse, he's remarried -- to Drue's eighth-grade frenemy, Wendy, now his office manager. And they're offering her a job. It seems like the job from hell, but the offer is sweetened by the news of her inheritance -- her grandparents' beach bungalow in the sleepy town of Sunset Beach, a charming but storm-damaged eyesore now surrounded by waterfront McMansions. With no other prospects, Drue begrudgingly joins the firm, spending her days screening out the grifters whose phone calls flood the law office. Working with Wendy is no picnic either. But when a suspicious death at an exclusive beach resort nearby exposes possible corruption at her father's firm, she goes from unwilling cubicle rat to unwitting investigator and is drawn into a case that may -- or may not -- involve her father. With an office romance building, a decades-old missing-persons case reopened, and a cottage in rehab, one thing is for sure on Sunset Beach: There's a storm on the horizon."--,Provided by publisher.