Of blood and bone
(Playaway) 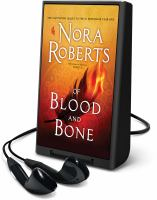 General Note
Title from container.
General Note
"HD."
General Note
"LIGHT."
General Note
Previously released by Brilliance Publishing, Inc., ℗2018.
General Note
Release date supplied by publisher.
General Note
Issued on Playaway, a dedicated audio media player.
General Note
One set of earphones and one AAA battery required for listening.
Participants/Performers
Performed by Julia Whelan.
Description
"Fallon Swift has two loving parents, but her true father died long ago, in what was known as the New Hope Massacre. The distant city where her mother once dabbled casually in the craft has been in ruins for years, reclaimed by nature, desolate since the Doom descended and billions grew sick and died. Traveling anywhere now is a danger, as vicious gangs of Raiders and fanatics called "Purity Warriors" search for their next victim. Those like Fallon, in possession of gifts, are hunted -- and as her thirteenth birthday looms, her true nature, her identity as The One, can no longer be hidden. Now the time has come for Fallon to walk away from her home, into a mysterious shelter in the forest where her training can begin. Under the guidance of Mallick, whose skills have been honed over centuries, she will complete three quests: She will learn the old ways of healing, and find powers within herself that she never imagined. And when the time is right, she will take up the sword and fight."--,Provided by publisher.