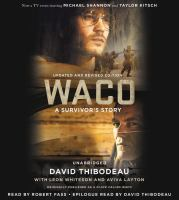 General Note
Compact discs.
General Note
Originally published as: A place called Waco.
Participants/Performers
Read by Robert Fass, epilogue read by the author.
Description
To commemorate the 25th anniversary of the FBI's siege at Waco compound, and tie-in to the upcoming Spike TV mini-series, comes an updated reissue of the critically acclaimed A PLACE CALLED WACO by Branch Davidian survivor David Thibodeau, now titled Waco: A Survivor's Story.For the first time ever, a survivor of the Waco massacre tells the inside story of Branch Davidians, David Koresh, and what really happened at the religious compound in Texas. When he first met the man who called himself David Koresh, David Thibodeau was drumming for a rock band that was going nowhere fast. Intrigued and frustrated with a stalled music career, Thibodeau gradually became a follower and moved to the Branch Davidian compound in Waco, Texas. He remained there until April 19, 1993, when the compound was stormed and burnt to the ground after a 51-day standoff. In this book, Thibodeau explores why so many people came to believe that Koresh was divinely inspired. We meet the men, women, and children of Mt. Carmel. We get inside the day-to-day life of the community. Thibodeau is brutally honest about himself, Koresh, and the other members, and the result is a revelatory look at life inside a cult. But Waco is just as brutally honest when it comes to dissecting the actions of the United States government. Thibodeau marshals an array of evidence, some of it never previously revealed, and proves conclusively that it was our own government that caused the Waco tragedy, including the fires. The result is a memoir that reads like a thriller, with each page taking us closer to the eventual inferno.