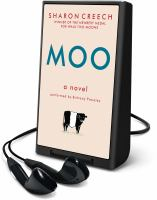 General Note
One set of earphones and one AAA battery required for playback.
General Note
Title from Playaway label.
General Note
Previously released by Harper Audio, ℗2016.
General Note
Issued on Playaway LIGHT, a dedicated audio media player.
Participants/Performers
Read by Brittany Pressley.
Description
When twelve-year-old Reena, her little brother, Luke, and their parents move to Maine, Reena doesn't know what to expect. She's ready for beaches, blueberries, and all the lobster she can eat. Instead, her parents "volunteer" Reena and Luke to work for an eccentric neighbor named Mrs. Falala, who has a pig named Paulie, a cat named China, a snake named Edna, and one very ornery cow named Zora.