All is not forgotten : a novel
(Playaway) 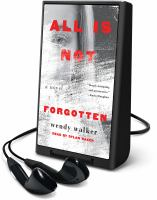 General Note
Title from container.
General Note
"HD."
General Note
"LIGHT."
General Note
Includes a bonus conversation with the author.
General Note
Previously released by Macmillan Audio, ℗2016.
General Note
Release date supplied by publisher.
General Note
Issued on Playaway, a dedicated audio media player.
General Note
One set of earphones and one AAA battery required for listening.
Participants/Performers
Read by Dylan Baker.
Description
It begins in the small, affluent town of Fairview, Connecticut, where everything seems picture-perfect. Until one night when young Jenny Kramer is attacked at a local party. In the hours immediately thereafter, she is given a controversial drug to medically erase her memory of the violent assault, but in the weeks and months that follow, as she heals from her physical wounds, and with no factual recall of the attack, Jenny struggles with her raging emotional memory. Her father, Tom, becomes obsessed with his inability to find her attacker and seek justice while her mother, Charlotte, struggles to pretend that this horrific event has not touched her carefully constructed world. As Tom and Charlotte seek help for their daughter, the fault lines within their marriage and their close-knit community emerge from the shadows, where they have been hidden for years, and the relentless quest to find the monster who invaded their town--or perhaps lives among them.

Walker, Wendy, and Dylan Baker. All Is Not Forgotten: A Novel Unabridged., Findaway World, LLC, 2016.