The No. 1 Ladies' Detective Agency
(DVD) 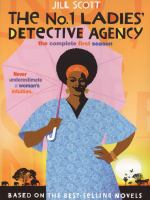 General Note
Contains the pilot and all 6 episodes from the first season.
General Note
Based on the novels by Alexander McCall Smith.
General Note
Originally broadcast on HBO television.
Creation/Production Credits
Directors, Anthony Minghella, Charles Sturridge, Tim Fywell ; series producer, Tim Bricknell.
Participants/Performers
Jill Scott, Anika Noni Rose.
Description
Follows Mma Ramotste, a recently bereaved woman, as she sets up the only woman-run Private Detective Agency in Botswana and her attempts to get it off the ground. She gets help from Mma Makutsi, her new secretary, and Mr. JLB Matekoni, the owner and super mechanic of the wonderful Speedy Motors. Mma Ramotste takes on cases, meets many new people who need her help - from a woman who thinks the man who has turned up at her door is not her father, to another lady who has a boyfriend who may or may not be faithful to her.
Target Audience
TV-MA.
System Details
DVD.
Terms Governing Use and Reproduction
For private home use only.
Language
English dialogue, French or Spanish subtitles; English subtitles for the deaf and hard of hearing.