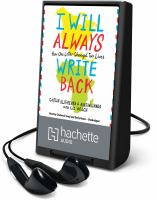 General Note
Title from Playaway label.
General Note
Originally released byHachette Audio ℗2015.
General Note
Release date supplied by publisher.
General Note
Issued on Playaway, a dedicated audio media player.
General Note
One set of earphones and one AAA battery required for listening.
Participants/Performers
Read by Chukwudi Iwaju and Emily Bauer.
Description
It started as an assignment. Everyone in Caitlin's class wrote to an unknown student somewhere in a distant place. All the other kids picked countries like France or Germany, but when Caitlin saw Zimbabwe written on the board, it sounded like the most exotic place she had ever heard of--so she chose it. Martin was lucky to even receive a pen pal letter. There were only ten letters, and forty kids in his class. But he was the top student, so he got the first one. That letter was the beginning of a correspondence that spanned six years and changed two lives. In this compelling dual memoir, Caitlin and Martin recount how they became best friends--and better people--through letters. Their story will inspire readers to look beyond their own lives and wonder about the world at large and their place in it.

Alifirenka, C., & Iwaju, C. I will always write back: how one letter changed two lives .

Alifirenka, Caitlin and Chukwudi, Iwaju. I Will Always Write Back: How One Letter Changed Two Lives. .

Alifirenka, Caitlin and Chukwudi, Iwaju. I Will Always Write Back: How One Letter Changed Two Lives .

Alifirenka, Caitlin,, and Chukwudi Iwaju. I Will Always Write Back: How One Letter Changed Two Lives