The Precipice a novel
(Playaway) 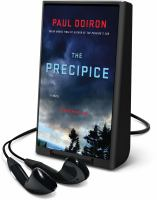 General Note
Title from Playaway label.
General Note
Originally released by Macmillan Audio ℗ 2015.
General Note
Release date supplied by publisher.
General Note
Issued on Playaway, a dedicated audio media player.
General Note
One set of earphones and one AAA battery required for listening.
Participants/Performers
Performed by Henry Leyva.
Description
When two young female hikers disappear in the Hundred Mile Wilderness, Maine game warden Mike Bowditch joins the search to find them. When two corpses are discovered - the bones picked clean by coyotes - rumors spread that the women were stalked and killed by the increasingly aggressive canines. Despite some misgivings, Bowditch does his grisly job. But he finds his complacency challenged by his new girlfriend, the brilliant but volatile biologist Stacey Stevens, who insists coyotes merely scavenged the bodies after the women were murdered. Were the young women really killed by coyotes or, as Stacey insisted, were they murdered by the most dangerous animal in the North Woods? Print run 40,000.