Update: with Watkins Park branch location joining the others on October 25, all 21 NPL locations will have resumed walk-in service. Get the latest on service at NPL locations. 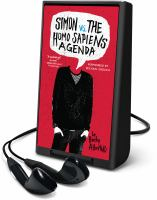 In this library
Other Locations

General Note
One set of earphones and one AAA battery required for listening.
General Note
Title from Playaway label.
General Note
Previously released by Harper Audio, ℗2015.
General Note
Issued on Playaway Light, a dedicated audio media player.
Participants/Performers
Performed by Michael Crouch.
Description
Sixteen-year-old and not-so-openly gay Simon Spier prefers to save his drama for the school musical. But when an email falls into the wrong hands, his secret is at risk of being thrust into the spotlight. Now Simon is actually being blackmailed: if he doesn't play wingman for class clown Martin, his sexual identity will become everyone's business. Worse, the privacy of Blue, the pen name of the boy he's been emailing with, will be compromised. With some messy dynamics emerging in his once tight-knit group of friends, and his email correspondence with Blue growing more flirtatious every day, Simon's junior year has suddenly gotten all kinds of complicated. Now, change-averse Simon has to find a way to step out of his comfort zone before he's pushed out - without alienating his friends, compromising himself, or fumbling a shot at happiness with the most confusing, adorable guy he's never met.

Note! Citation formats are based on standards as of August 2021. Citations contain only title, author, edition, publisher, and year published. Citations should be used as a guideline and should be double checked for accuracy.