The Petaybee Trilogy: Powers That Be, Power Lines, and Power Play
(eAudiobook) 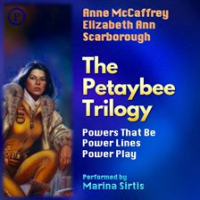