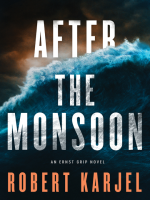 1) After the Monsoon: An Ernst Grip Novel

From the author of the international bestseller The Swede comes an electrifying thriller set in the terrorist- and pirate-infested world of the Horn of Africa—where the sea caresses the desert, alliances shift like sand, and a Swedish detective can count on nothing but his own shrewdness to survive.

A Swedish army lieutenant drops dead on a shooting range in the desert. Was it an unfortunate accident—or something more nefarious?

A Swedish security agent is summoned to interrogate a terror suspect held by the FBI in this sophisticated, fast-paced thriller—but the prisoner isn't the only one with something to hide.

At a remote military base in the Indian Ocean, the FBI is trying to get a prisoner to confess. But the detainee, a suspect in an Islamist-inspired terror attack in the United States, refuses to talk.